I am definitely not a foodie and if you know me personally, you might be surprised to find me writing a post about food.  On any given day I would rather scrub every floor in my house with a toothbrush than think about the answer to that dreaded question “What’s for dinner?”

I haven’t always been like this. There was a time when I’d put more effort into meal planning and prepping. Having small children who demand to be fed forces you to prepare decent and nutritious meals at least once a day. But over the last several years, my aversion to cooking has reached an all time high, if it gets much worse, I think we’ll be left to forage for crumbs in the sofa cushions soon.

I wish I enjoyed cooking, but I just don’t. I can’t even fake it. I envy friends who not only serve up delightful meals, but find great joy and excitement in doing so. Dishes so inspiring and delicious! The look on my husbands face as he bites into a flavorful morsel… I see him glance at me from across the table, he sheepishly says “Wow, that’s good.” I know he wants to spare me any embarrassment, but I feel ashamed. To hide my guilt, I usually turn the dinner party conversation to the tragic, sometimes funny, stories of my kitchen fiascos. I leave the party vowing to never again serve a haphazardly thrown together last-minute meal. He deserves better.

But my enthusiasm and aspirations quickly diminish as my friend goes on to tell me how easy the dish was to prepare…”OH, it’s so easy! You just sauté some garlic, set that aside, chop up some lemon grass, set that aside, then you…” I don’t remember exactly, after the third step I sort of lost interest. I not only lose interest… I want to run away kicking and screaming, “NO YOU CAN’T MAKE ME DO THIS!!!” I mean really? More than 3 steps??? The only thing that should come after “you just” is “add water”. So, there goes my best intentions for preparing anything close to fabulous meals. What is wrong with me?

Dinner time frustration finally came to an all time high a few weeks ago as I hunted around for something to boil and serve when my husband suggested we try having meals delivered.  OH JOY! REALLY??? I was so excited, I had thought of the idea myself, almost nightly, but it just seemed a little ….extravagant? Lazy? I immediately tossed the can opener aside and headed to the computer. If I hurried, perhaps I could get a meal delivered TONIGHT? No such luck… but I did a little research on meal delivery services, if you can call reading one review research, and since we knew people who used and were happy with Blue Apron, we decided to go with that.

Sadly, we’d have to wait a week for the service to start. What were we supposed to do until then? Starve?

Finally, after a week of anticipation the day finally arrived. There wasn’t a more glorious sight than seeing that little box waiting for me as I pulled up in the driveway.

I opened the box.

I have to admit, I was more excited about the actual box than its contents. The thought of having at least three meals right there in front of me, along with instruction cards, was reassuring. Even if I was a slightly doubtful this was three whole meals for two adult people. But hey, what do I know? The folks at Blue Apron are the professionals.

I tried to be positive. It was a Wednesday, a busy day for me, so I started cooking at about 6pm. It was also a very hot day, too hot to cook. The heat always zaps my appetite and I would have been happy to have eaten a few crackers and some cheese for dinner, but I couldn’t bag out on the first day. Where was my gratitude? My sense of adventure? I tried to convince myself this would be fun. Having all the ingredients right there along with the recipes would reduce some of the guess-work and make this more enjoyable. More joy, less stress. I might even learn something about spices and seasonings.

Day 1-Chicago Style Italian Beef Sandwiches
I decided to go for what looked the easiest. I’d like to say it was good, I’m sure it was delicious, but the hot weather and my less than upbeat mood made it hard to enjoy the meal. Plus, I am not a big meat-eater, and I found the meal too heavy for such a hot day. I should have opted for the seared salmon.

I considered day one to be only somewhat successful. I managed to get a meal on the table. I can’t say I felt very enthusiastic about it. 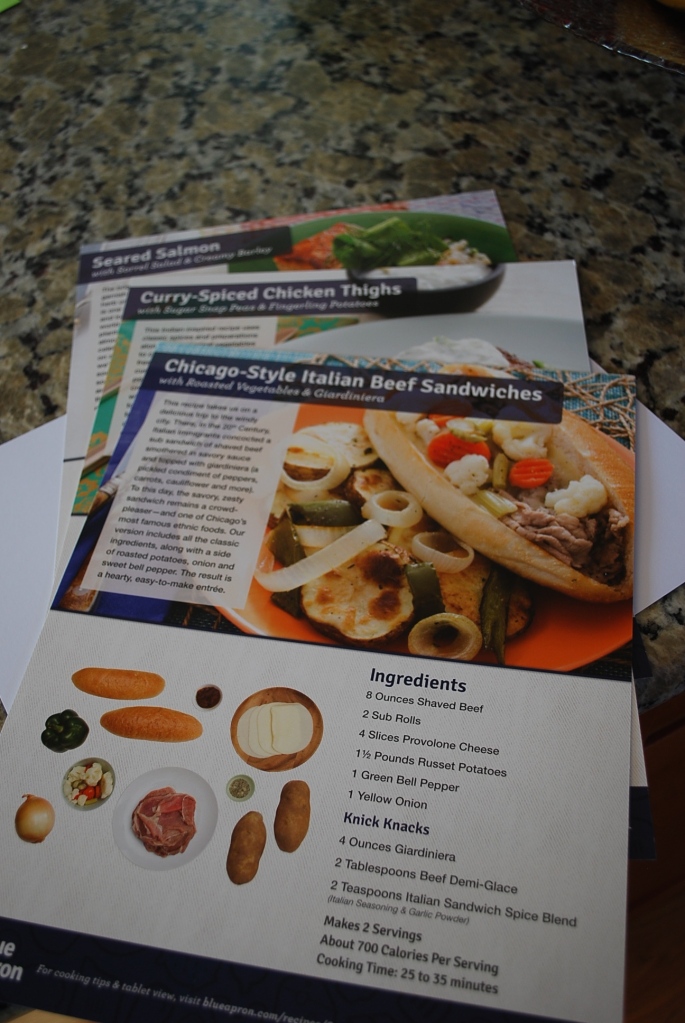 Day 2 – Curry Spiced Chicken Thighs
I managed to suffer through it and made a really tasty meal that could have fed a mouse.

Day 3 – Seared Salmon
Well, by now, I was just a little over all the chopping of onions, zesting of lemons and  peeling of garlic… but I could do this, even though it was still too hot to cook and I got a late start on the meal again.

Day two and day three were about as successful as day one. I still lacked enthusiasm. I managed to fumble through the first week of meals and tried not to complain too much.

I was less excited about our second delivery. I was thrilled to see the box there waiting for me, but I was also filled with just a little dread about what I’d find inside. Oh Well…

Day 4 – pan Seared Cod with Basmati Rice
This day seriously made me rethink the idea of ordering food I have to cook. It was stressful. I was trying to juggle getting the basmati rice cooked, but not overcooked while I chopped veggies, deseeded lemons and sautéed snow peas to a nice bright green.The heat only added to my stress level – that and trying to include a 16 month old in on the cooking session, I forgot 16 months is still just a little young to actually be considered helpful, especially at chopping vegetables. How in the world did I ever manage as a mother? Really – I used to cook, clean take care of kids – – and did it all quite well. Where is that woman?

Day 5 didn’t happen. It looked complicated. And it was too hot to cook.

And the rest of the days are somewhat of a blur.

I have to say, after 3 weeks, it was time to cut the Blue Apron strings.

Over all lessons and Critique

Here is a sampling of the meals we had delivered over the course of the month….ALL very tasty. I have no complaints about the quality or flavor of the food.

At first glance it appears the meals can be prepared in just six steps, which is really four too many.  However, I quickly found each set of steps involved two or more steps. This is where I learned my very first lesson: recipes are deceiving. Aside from that little fact, I also learned a few other things:

2- Follow the recipe and don’t alter it in any way – like omitting key ingredients that seem insignificant. I always figured if a recipe calls for a minuscule amount of something, how important can it be? Maybe pretty important.

3- Ghee isn’t just a uniform you wear in Karate class. That would be a gi.

4- There is a difference between a shallot and a green onion. Not only that, some people think the difference is so wide, an average onion should never be used as a substitute for a shallot. Whatever… (should I refer back to lesson 2?)

5- Sorrel is not just the color of a horse.

6- We may be extreme over eaters – I am always blown away (and a little disgusted) by the portion sizes I see served in restaurants. I find it easy to share a meal with a friend or two. But the meals from Blue Apron had me questioning my eating habits and ideas about portion size. Perhaps one cup of barley and two asparagus spears IS a full meal.

7- Lemon zest is a staple ingredient for just about any recipe, though only a small amount is used, don’t omit it.

Overall, we were satisfied with the quality of the food and variety of the menu. My main complaint, other than having to cook every meal, would be that the portion sizes were very small.  I think for a single person who enjoys cooking, but has little time to plan and shop, this is a very good service at an affordable price.

About the price:  I’m certain the meals would have cost more had I gone out and bought all the ingredients. True, some of those ingredients wouldn’t be purchased every week and would just be added to my spice cabinet, which currently consist of cinnamon, Old Bay and cream of tartar. The cinnamon and cream of tartar were purchased for a craft project (go figure). But the meats and vegetables alone may have added up to more than $60.00 a week, especially if I had purchased enough to make a filling meal for each of us. However, when feeding more than two people, the price of the service goes up and I am not sure this would be a cost-effective way to feed a family, or anyone with a hearty appetite. Not recommended for lumberjacks.

So there you have it, my adventure into the world of the culinary arts.  It lasted about all of a month. I’ve come to accept the fact that I do not enjoy cooking and never will. I remind myself  my husband didn’t marry me for my cooking skills – he could have taken the high road after the first meal I made him (steak and kidney pie) – don’t ask… basically he grew up in Scotland and always went on about missing steak and kidney pie, so I surprised him with my home-made version. Yep- he should have known right then and there.

And now, I am off to hunt for tonight’s meal – unfortunately, the dog may have beaten me to the sofa.

14 thoughts on “And Now for Something Completely Different”